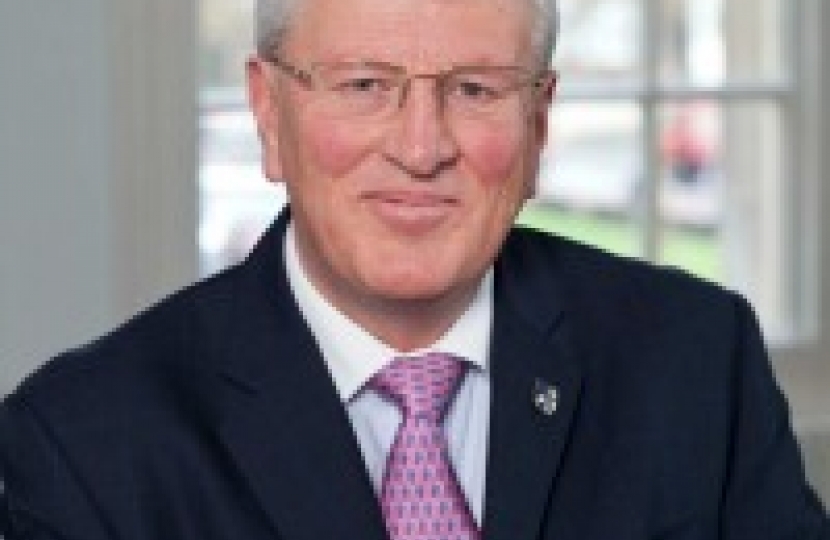 Madam Chairman, we have witnessed a turbulent few months for local government.
As well as my responsibilities as Leader of Surrey County Council, members will know that I am the Conservative Group Leader at the Local Government Association.
I have spent many months working behind the scenes to try and make the Government really understand the demand-led pressures faced by Surrey and local government as a whole.
Along with the Chairman of the LGA, I have had meetings with the Secretary of State for Communities and Local Government and the Chief Secretary to the Treasury to go through the issues in detail with them.
Members will know that I take my duty to represent the vulnerable in our community very seriously.
With the number of elderly people in our county set to increase by 20,000 by 2020 the cost of providing adult social care services are increasing by a staggering twenty million pounds every year.
But it is our responsibility to make sure they are provided for.

I lobbied hard for councils with adult social care responsibility to be able to raise council tax to deal with this specific pressure.
And I was pleased when the Chancellor announced in November’s Autumn Statement that an extra two per cent could be raised.
The measure meant we would be able to raise an extra twelve million pounds to help tackle the growing demand in adult social care services.
But this would only help reduce the gap. It would not close it.
It was clear that more support was necessary for those who needed it most – many who had served their country and now looked to us for help.
Madam Chairman, it therefore came as a complete shock when ministers announced late in December – just days before Christmas – that they planned to dramatically slash Surrey’s funding by fifty million pounds in a single year.
We had planned carefully to manage a cut in our grant but this was nearly double the amount government officials had led us to expect.
My concern for the services we provide to the most vulnerable people in our county dominated my thoughts throughout Christmas and New Year.
The support for adult social care we could deliver through the extra two per cent on council tax risked being completely wiped out.

So, I have spent the last four weeks impressing on the Government the need to recognise the unprecedented demand being placed on councils such as Surrey.
And I am grateful for the support we’ve had from Surrey MPs in making our case.
Along with increasing demand for adult social care services Surrey is required to provide more than eleven thousand extra school places over the next five years - despite funding for this falling short by around thirty million pounds every year.
Madam Chairman, I am pleased to inform members that ministers have listened to my concerns.
The Secretary of State told me yesterday – and then announced in parliament – that three hundred million pounds of transitional funding would be provided to councils over the next two years.
That is one hundred and fifty million pounds each year to deal with the impact of the reduction in government grant.
I can tell members that at six thirty yesterday evening we received confirmation that we would benefit from a transitional grant of eleven point nine million pounds this year and twelve point two million pounds in 2017-18.

In addition, the Secretary of State has agreed to a package of measures that will help councils to continue to provide the services residents depend upon year after year.
Firstly, the Government has announced that no council will face the prospect of receiving a negative grant over the next two years.
Secondly, I have been pushing hard for the Government to recognise the need to improve its funding formula for local government. Its current method does not recognise the changing basis of needs and the real costs of delivering services in different parts of the country.
I am therefore very pleased that the Government has agreed to launch a fair funding review to carefully consider the challenges different councils face when providing services.
For Surrey the system needs to better reflect the demands we face from demographic factors, as well as the extremely high cost of providing services in the South East of England.
I am sure that our borough and district colleagues will also welcome a further concession by Government – a concession that will continue to allow them to increase council tax by at least five pounds per Band D property.
In addition, councils will be able to increase planning fees in line with inflation – relieving an unnecessary pressure on budgets.
Finally, councils will now have until October to decide on whether they accept the Government’s offer of a four year deal.

Madam Chairman, I appreciate the willingness of ministers to listen to our case and recognise the extent of the pressures we are facing.
The good news is that the offer to local government as a whole and Surrey specifically has improved.
While the transition grant for Surrey is welcome it is not as much as we had hoped for and will still place a strain on services.
The budget we are proposing includes a recommendation that council tax be increased by three point nine nine per cent.
On this basis we can go forward and set an overall budget envelope today, providing services with certainty over their cash limits as set out in Appendix Four.
It will also allow us to begin work on our new thirty million pound Public Value Transformation programme.
A programme that will continue the hard work we have already started to provide true value for money to our residents.
We know tough choices will still have to be made. Savings will still have to be found. Innovations will still continue to be required.
We share the Government’s commitment to eliminating the national deficit. In fact, no part of the public sector has done more to play its part in this cause than local government.

We have always accepted that our grant from Government would be cut over four years. We have always accepted we must do more for less. We have always accepted the need to provide real value for money to Surrey’s residents and businesses.
Madam Chairman, Surrey County Council should be proud of finding savings of more than three hundred and fifty million pounds since 2010. And that it intends to save another three hundred and fifty million by 2020.
These are challenging times for local government and it is vital Government recognises the very real pressures we are facing.
I pledge again my commitment to always do what’s right for Surrey.
I will continue to put the case for Surrey to receive a fairer deal.
I will be tenacious in demanding that Surrey gets a fair allocation from the Better Care Fund and also from Business Rate Retention.
The last month has shown me that through working with this Conservative government and our Surrey MPs we are able to bring about real improvement in policy.
Ministers have listened to our concerns but there is still much for us to do.

I call on members to agree this budget so we can continue the work to secure a good deal for the county.
Before I conclude, Madam Chairman and members, may I pay a personal thanks to the Director of Finance, Sheila Little and her team for their excellent work in ensuring that everything was done to pull this budget proposal together.
Finally, Madam Chairman and members, the recommendations are laid out in the report on pages sixteen and seventeen. I remind members that the key factor in these recommendations is that the budget envelope is based on a council tax increase of three point nine nine per cent - reflecting a gross budget of one thousand six hundred and eighty one million pounds.
I commend this budget to the Council for agreement.